GET A QUOTE NOW AT: ​603-921-1706
Nick Tracey Roofing is a professional residential roofing contractor company serving the greater Merrimack New Hampshire area. Our services include:
About Merrimack, New Hampshire – History
Merrimack is located in Hillsboro County in the southern portion of New Hampshire. It is comprised of four villages: Reeds Ferry, Souhegan Village, Thorntons Ferry, South Merrimack, and Souhegan Village, all located near the mouth the river. Each village had its own post office, schools, shops, and social life.
Rivers were the main source for travel. Thornton Ferry and Reeds Ferry are named after the ferry service that operated between Merrimack, Litchfield and Litchfield. To accommodate travelers, there were taverns located near the ferry terminals. Later, there were taverns on Route 3. These were stops for stagecoaches.
Souhegan Village was the central village and was named after the river. It was later changed to Merrimack. Because of the difficulty in tilling the soil, South Merrimack Village was often called “Hard Scrabble”.
Merrimack was once part of the 1673 Dunstable grant. Massachusetts granted Naticook the town organization in 1734. It was comprised of Litchfield and a part of Merrimack. The boundary line between Massachusetts, Massachusetts, and New Hampshire was redrawn in 1746. Land that was once part of Massachusetts became part of New Hampshire.
April 2, 1746, Governor Benning Wentworth signed an charter declaring that the land from Pennichuck Brook up to the Souhegan River would become the Town of Merrymac. This area was home to less than 50 families at the time. The Merrimack and Souhegan Rivers are where Pawtucket and Nashuaway, as well as the Penacook Indians, were home to the Penacooks. The Penacooks were the largest in number and Passaconaway was the ruler over all the tribes of the Merrimack Valley.
June 5, 1750, the town charter was ratified. This gave the town an additional three-miles to the north. A new section, called Souhegan East, was added to the area north of the Souhegan River.
Merrimack is unique in that it has two birthdays: April 2, 1746, when it was founded, and June 5, 1750, when it was expanded. It was part of four towns and two states just prior to incorporation: Dunstable (Massachusetts), Litchfield, Bedford and Amherst (New Hampshire).
At the beginning, there were very few stores and no schools. The industry consisted of sawmills and gristmills. The majority of residents were farmers.
In the center of town was built the original meetinghouse. Two cemeteries were established. Two cemeteries were found in the area. The first is Turkey Hill, located on Meetinghouse Road. Thornton Cemetery, Route 3, has the oldest gravestone.
Merrimack saw a lot of growth during the Nineteenth Century. The meetinghouse was too small for the area that had grown to become the town’s center. Two new churches were constructed in convenient locations: one in South Merrimack, the other on Baboosic Lake Road. To replace the old meetinghouse, a new town hall was constructed.
Merrimack soon had eight one-room schoolhouses. Later, that number grew to twelve. Merrimack was the first place to offer higher education. Reeds Ferry was home to McGaw Normal Institute. This institute is a teachers college. Later, it was converted to a high school. However, the new high school on Baboosic Lake Road was built. Now, this school is the Mastricola Middle School.
Brickyards became the new industry. Bricks were floated down Merrimack River to Lowell Mass. Fesseden and Lowell Company built a cooper shop in Reeds Ferry. Over the years, the Old White Mill on Main Street has seen many changes. It was originally built as a woolen mill. Later, it became a shoe shop for tannery and several other small businesses. Today, it is a chemical company.
Four stops were made by the railroads when they arrived in Town. Railroad Avenue still has its depot.
Merrimack flourished in the 20th century. The population grew. Three elementary schools, a middle school and a high school were constructed. The farms were replaced by developments, apartments, and condominiums. Industrialization changed again. Modern facilities were used to house manufacturers of furniture, paper products and electronics. The brewery and hamlet were established and the Budweiser Clydesdales relocated to Merrimack. Route 3 was home to many larger shops and shopping centers, as well as Route 101A in South Merrimack. From a volunteer fire department, the force grew to three stations and became a full-time fire service. The police department grew and acquired its own facilities. The additions were made to the Town Hall, the library, and the schools.
Highway Department was formed to improve and build more roads. Many changes were made to the landscape by the construction of the Everett Turnpike, and the toll booths. Merrimack has experienced many changes since 1746 when it was incorporated. 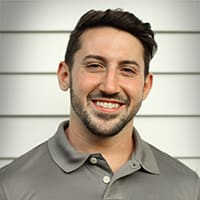 “I will personally guarantee your 100% satisfaction.”
NICK TRACEY